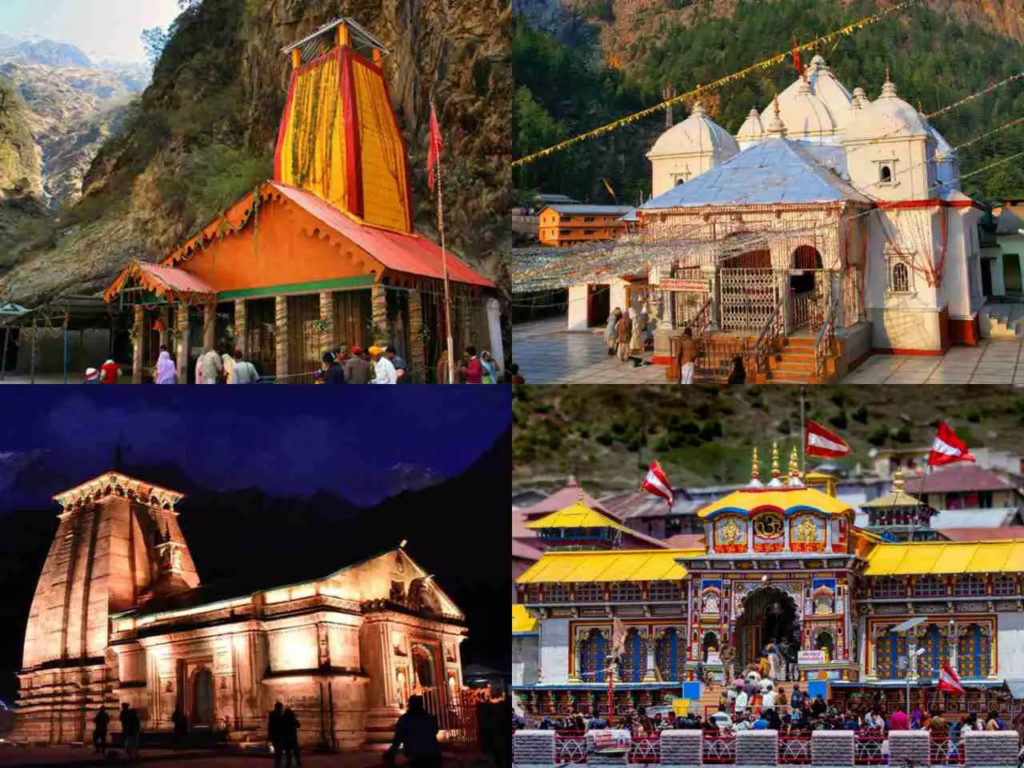 Chardham Yatra are the holiest temples which are located in the state of Uttarakhand. In Hinduism, it is believed that it is the pathway to the Moksh and all Hindu peoples want to Chardham Yatra once in their lifetime, so they get “Moksh”. The Chardham majorly consists of four temples which are Yamunotri, Gangotri, Kedarnath, and Badrinath and it is located in different districts of Uttarakhand. These temples have their own unique stories like 5 Kedars is built by the Pandavas in ancient times when they are searching for Lord Shiva to give him Moksh after killing the Kauravas and Badrinath is built by the Adi Yogi Shankaracharya in ancient times and people believe Lord Vishnu is residing here. Every year crores of people visit Chardham Yatra and examine the beauty of these unique places.

There are 5 Points where the two rivers meet and these points are also known as the Prayag. There are 5 Prayag which are Vishnuprayag, Nandprayag, Karnaprayag, Rudraprayag, and Devprayag

– It  is the place where the river Alaknanda and Dhauliganga river meet and there is an ancient temple called Vishnu Kund and it is said that the sage Narad worshipped Lord Vishnu at this sanctified spot.

–  It  is the place where the river Alaknanda and Nandakini meets.

– It  is the place where the river Alaknanda and Pindar river meets and it is said that Karna of Mahabharata meditated here for many years to acquire the impregnable shield, which made him a formidable warrior on the battlefield.

–  It  is the place where the river Alaknanda and Mandakini meets and the cardinal Hindu temples of Rudraprayag are the Jagdamba temple and Shiva temple.

–  It is the place where the river Alaknanda and Bhagirathi meets and when it meets it takes the name Ganga. It is believed that Lord Rama and his father King Dasharath (from the epic Ramayana) performed penance here.

Places to visit during Chardham Yatra

– is famous for the unique beauty of its grasslands, greenery, and it is located in the Uttarkashi district of Uttarakhand.

– It is one of the most thrilling and exciting treks, is located on the Indo-China Border distance of 90km from    Uttarakashi. It is a wood-lined stairway in the mountains.

–  is a Hindu temple located in the Rudraprayag district. This ancient temple is dedicated to Lord Vishnu and credited to God Shiva’s marriage to goddess Parvati at this venue.

– It is a popular hill station of snow-capped mountains and adventure activities such as trekking, skiing, etc. It is also famous for the Bugyals (high-altitude alpine grassland) and it is located in the Chamoli district of Uttarakhand.

– It is a white winter wonderland and famous for its ski resorts, ski slopes, and ski events that are organized every winter. It is the hill station located in the Chamoli district. Every year lakhs of people visit Auli for exploring the beauty and for enjoying the snowfall as the density of snowfall in Auli is more.

–  is a National park that is in 8750 hectares (33.8 sq mi) and is famous for its meadows of rare alpine flowers and the variety of flora. It is located in the Chamoli district of Uttarakhand and is 25km far from Badrinath. The valley of flowers is having 500+ variety of species of plants. The best time to visit the valley of Flower is between July and mid-August is the time when it is full of bloom. The valley is open from June to October.

– It  is formally known as Gurudwara Sri Hemkund sahib and it is highly revered pilgrimage site for the Sikh community. In ancient times Guru Gobind Singh Ji (tenth guru of the Sikhs) and it is believed that they spent his 10 years and done meditation here. It is at the height of 4329mts above sea level and it is the highest Gurudwara of the  Sikh Community and is having 6-kilometer steep trek. Hemkund Sahib is open for the pilgrims only for 4 months from June to October and remains closed for 8 months because of heavy snowfall.

– It is the last Indian village which is located on Indo-China Border and it is in Chamoli district of Uttarakhand and it is 5 km far from the Badrinath Temple.

– It is one of the most alluring places which are located near Mana Gao in the Chamoli district of Uttarakhand. It is believed that water does not touch sinners and the waterfall stops falling after contact with an offender.

Panch Kedar relates to the Pandavas (from epic Mahabharata), it is believed that after killing his cousins(Kauravas) sage Vyas Rishi advised the Pandavas their act of killing off their own kins could be pardoned only by Lord Shiva. Then, the Pandavas went in the search of Lord Shiva. Lord Shiva was already convinced of the guilt of Pandavas and in order to avoid Shiva took the form of Bull and went into hiding himself. Pandavas also chased him and Bheema recognised Shiva in the form of a bull then he tried to capture the bull from backside, but they able to able to catch the tail of the bull. But the bull-formed Shiva disappeared into the ground to later reappear in parts, with the hump raising in Kedarnath, arms appearing in Tungnath, the face showing up in Rudranath, the nabhi (navel) and stomach in Madhyamaheshwar and the hair appearing in Kalpeshwar. Pandavas built the five temples in these five places and worshipped Lord Shiva and freed from their sins.

– It is dedicated to Lord Shiva and is situated in the Rudraprayag district of Uttarakhand and located at an altitude of 3583m (11755 ft). For reaching the temple you have to the uphill trek of 14km from Gaurikund.

– It is one of the highest Shiva Temples in the world and 2nd panch kedar. It is situated in the Rudraprayag District of Uttarakhand. It is located at an altitude of 3690m (12106 ft) from sea level and there is another place to visit after Tungnath that is Chandrashila which is 2 km above the Tungnath Temple. Chandrashila is the place from where you can examine the beauty of sunrise in mountains.

– It is dedicated to Lord shiva and 3rd panch kedar and situated in Chamoli district of Uttarakhand and it is located at an altitude of 3600m (11811 ft) and for reaching there approx you have to trek very hard 24km of uphill trek.

–  it is dedicated to Lord Shiva and it is the 4th of the Panch Kedar and is situated in Gaundhar Village of Rudraprayag District. It is located at an elevation of 3497m (11473.1 ft) from sea level. In this temple, Lord Shiva is worshipped in the form of a navel-shaped lingum.

–  It is the 5th in panch kedar and it is located at an altitude of 2200m (7217.8 ft) in the Urgam valley in the Garhwal region of Uttarakhand. For reaching the temple you have to trek 12km.

When Chardham is open for Pilgrims

All these temples are covered with mountains and these temples are temporarily closed for six months from almost November to April due to the heavy snowfall. In April on Akshay Tritya these temples are open for all pilgrims for six months that is from May to the 1st week of November. You can visit Chardham Yatra From May onwards but during May & June, there is so much of a rush because that is vacation time. The best time to visit Chardham travel is September and October because in this time period you can enjoy the beauty of snow-capped mountains and the climate is also favorable. In July and August, there is heavy rainfall and sometimes the road is also damaged during this time, you have to face some difficulties during the rainy reasons as well.